« Is it Valentine's Day yet? | Main | Best-ever slow-cooker pot roast »

"Hello, my name is Jacob, and I'm on steroids." 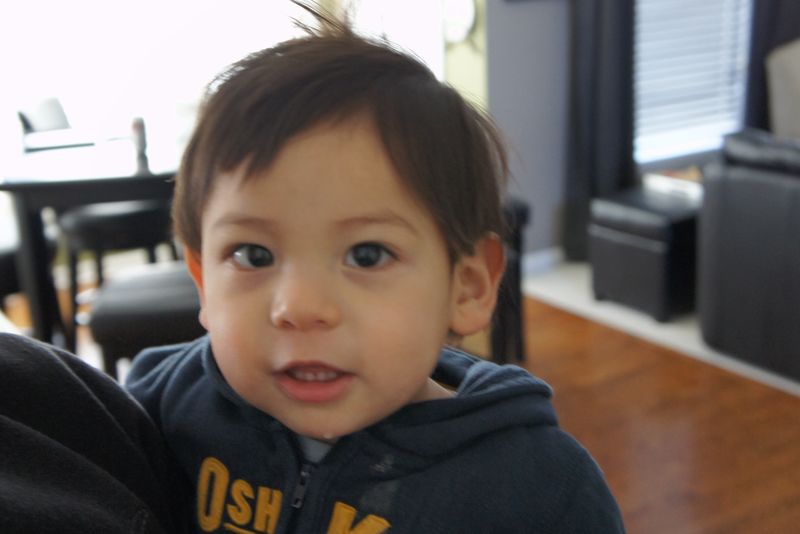 Well, it's turning out to be a very sleepless new year for me.  Jacob has croup.  It all started on Friday when he started with a runny nose.  I didn't think anything of it but apparently it's gone viral and has been keeping us up the past two nights.  Saturday night he had a wild coughing spell so I brought him into bed with me and propped him up as best as I could.  He still coughed quite a bit and even ended up coughing himself into vomiting.  Ew, I know.

Then last night the same thing happened.  Twice.  I ended up in the bathroom with him running the hot shower while we breathed in the steam.  He was enjoying it so much and only fussed when I wouldn't let him get in the water.  Poor kid.

That helped a little.  Then I bundled us both up and we headed out on the back deck at about 1 a.m. to take in the cold air, which really helped a lot.  The whole time David and I were out there with him (all of about 5 minutes) he was looking at us, wide-awake, like "what the heck?  why are we standing out in the freezing cold in the middle of the night?!"   After coming back in, his cough had subsided so I tucked him back into his crib where he quietly and peacefully slept for a few hours until another coughing spell came.

I went into his room and set up a little palette-of-a-bed on his floor nestled atop his Elmo foam couch.  He coughed himself into voming (again) so I took off his shirt and bundled him up right against me.  I moved the humidifier down on the floor by us and we both drifted in and out of sleep after a while, all while I was sitting up holding him.  I held him sleeping for the rest of the night until about 8 a.m. when he woke up again and this time with just a small cough.

I decided to take him into his ped's office just in case.  Since he had a bout with RSV a while back, I always worry about his breathing becoming an issue.

Thankfully our wonderful ped's office has walk-in hours every morning.  I took him in and he's actually not all that bad but the doc is putting him on a steroid for the next three days that will hopefully deter the coughing spells.  I hope it works!  Tomorrow we start back on our regular school routine and since I'll need to be getting up at 6:30 a.m. to get everyone set for the day, I need ALL the sleep I can get!

Here's hoping we're getting all the sickness of 2011 out of the way right at the beginning so we can have a wonderful rest of the year!

poor baby! sounds like we've had similar nights :( happy he's on the way to recovery.

Jacky: Get well!! Grammy loves you and praying for you! ;)