It's back.  The busy season of baseball.  This morning was a chillax one with a bit of sleeping in for me.  That is, until I was woken up to wipe a butt and then woken up again later because my kids were hungry.

I figured that was a good reason to finally get out of bed.

So after a nice little breakfast and some rockin' out to tunes from some of the artists at our favorite festival happening next weekend, it was time to start thinking soccer.  William had his final soccer game of the season today.  It was finally a nice enough day to be outdoors, thank GOD!  We spent most of this soccer season out in the cold wind!

After soccer, we decided to grab a late lunch (with coupons in hand, of course!) at Chick-fil-a.  Yum!  My favorite fast food joint, fo' sheezy!  I enjoyed some nice convo with my hubby while the kids played in the play area and got even more of their energy out.  Which is always nice.

Then the kids and I headed out on our own to canvas our 'hood with signage for the festival next weekend.  It's our yearly tradition.  Fun, fun!  The kids came home even more worn out and decided to veg out and play Club Penguin online until their evening baseball games.

And then it was time.  Baseball.  Ahhhhhh!  I was disappointed I couldn't see both games but Nathan's game was at 7 pm as was William's.  Darn you, schedule!

I did, however manage to get a photo of Nathan before he headed out for the fields. At any rate, it was totally fun watching my lil' big guy play.  He and his teammates had a blast! 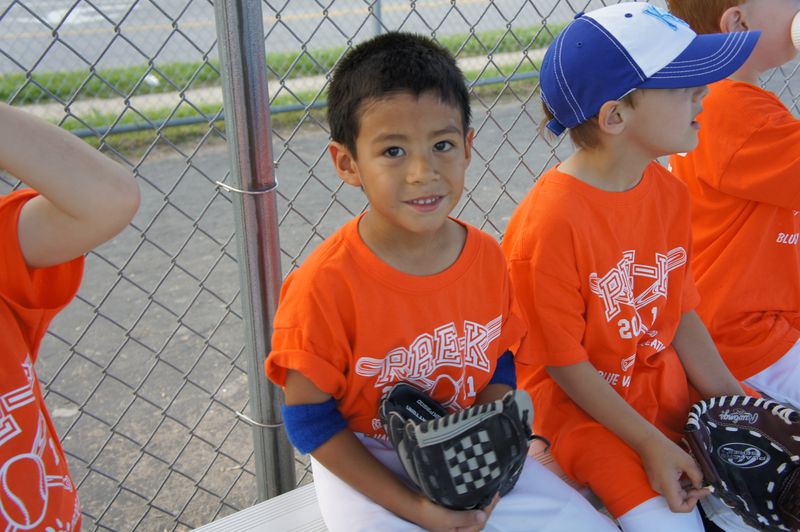 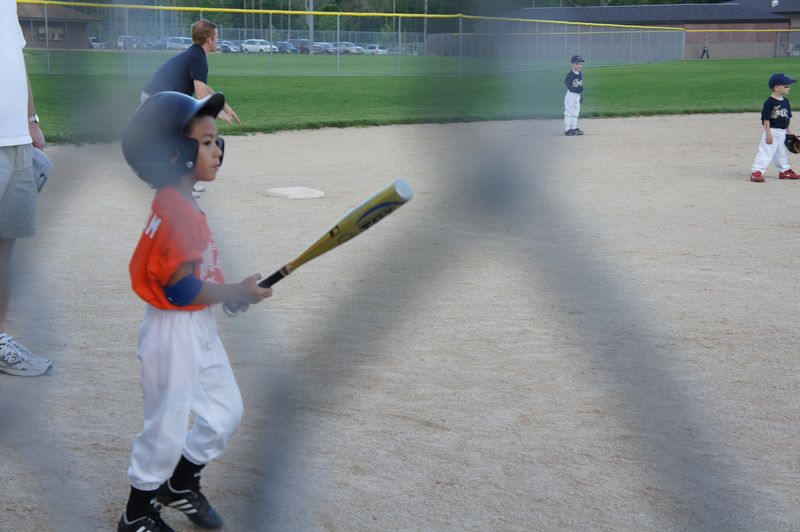 William had a fantastic game!  He was super stoked about catching a ball that was thrown to him just right in his glove!  The crowd cheered!  I saw him out there sort of doing an instant replay with his glove while grinning from ear to ear.

Recently a friend and I were talking and she mentioned how she thought t-ball was boring so she didn't sign her son up.  At the time she said it, I kind of only thought, "well, I'm certainly not signing my kid up so that I can be entertained, so it being boring to parents shouldn't really be an issue!"  I mean, if I only signed my kids up for stuff that piqued my interest, I think they'd spend a good amount of time in computer and web design classes!  But now, after this weekend, I can honestly say this t-ball thing is anything BUT boring! It's actually a little more exciting for us as parents because unlike coach pitch or machine pitch boys' baseball, these t-ballers hit the ball nearly every time!  SO UN-boring!  So excited William is getting a chance to make new friends that will soon be in Kindergarten with him --- the kids were SO cute to watch!

After the two 7 pm games, we headed over to DQ for a LATE dinner with kids and of course some ice cream!  It has been a loooong day, but so NOT boring!  Grateful that the warmer weather and summer sports are in full swing!

How is watching your kids play a sport they love boring? I am not a baseball fan for sure, but I DO love watching the boys play. I am with you...if the kids are interested then it's interesting. :)

Nina, those were my sentiments exactly! :) And how cute are they at that age anyway? I would watch them weave baskets! LOL!

IMO, even if you are bored, it still shouldn't stop you from signing up your kid for something they are interested in. When you have kids you have to sacrifice, it's what being a mom is all about. If you're that bored bring a book or browse on your smartphone while you're waiting.