I loved learning "How To Steal a Dog" with my kids.

During a recent visit, my mom had mentioned to Nathan how he should check out the book How to Steal a Dog (by Barbara O'Connor) from the library the next time he visited.  She went on and on about how great of a book it was and how it was set in North Carolina so he'd have to be sure and read it with a thick, southern accent.

Fast forward a few weeks after that.  I was online putting a few books on hold when I remembered the title she'd suggested.  As luck would have it, there were several copies available through our local library so I reserved one.  A couple of days later I received a notice that the book was ready to be picked up. 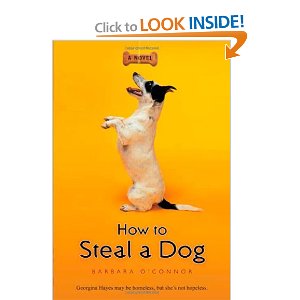 When I brought it home I remember thinking that I was going to have to read this with the kids.  I just needed to know what the book was about since my mom had talked it up so dang much!  Usually before bedtime we (actually my husband and not so much me) read a couple of stories with the kids then do a couple of chapters from a book, but that night I told the kids that I had a new book to share with them.  The one that Grammy had told us about.  I tried to muster up all that I could of my Texas roots to get a thick accent going.  I think I did pretty well.

We read a couple of chapters from the beginning and were introduced to spunky Georgina Hayes and her kid brother, Toby.  I was totally hooked.  The southern girl in me just came out when I read this book to my kids!  I loved everything about it!

As we got further and further along in the book and into the plot of just what was going on, I remember thinking I wanted to just keep reading!  Even without the kids!  One day while they were at school and I was making up their rooms and beds, I saw the book laying there on their desk.  I picked it up and began reading just part of the next chapter.  But I stopped myself about two sentences in.  I knew the kids would be upset if I read on ahead since we were all so into the story by that point.

The novel is plainly and simply about a young girl (Georgina) who has found herself in the worse possible situation a kid could be in.  She and her brother, along with their mother who struggles working two jobs, are homeless.  They live in their car.  Feeling desperate and wanting to change her circumstances, Georgina hatches a plan to steal a dog for what she believes are all the right reasons.  What she doesn't see coming is how the whole process would change her as a person and lead to an outcome she never saw coming.

This book is SO wonderful for SO many reasons!  My kids and I were able to have several discussions about homelessness and gratitude and what a wonderfully blessed thing it is to have a warm bed to sleep in at night.  We also had wonderful discussions about character, choices, and doing the right thing.  And we laughed.  We laughed and laughed!  The characters in this book came alive (if I do say so myself) because I absolutely loved sharing their words and expressions in an animated way with my kids.  They got a kick out of it.  Every night after we'd finished our chapters and turned out the lights, I'd say out loud to them (in my best North Carolina accent)  "Now ya'll gone ta sleep, ya hear Georgina & Toby?"  We'd all have a giggle and the boys would jokingly argue over who got to be Georgina and who got to be Toby.  We found ourselves repeating words and phrases from characters in the book just for the fun of it.

If you have kids ages 5 and up, I would *HIGHLY* recommend this read for them.  In fact, read it WITH them.  You'll all get so much more out of it.  It's a wonderful story about real life problems, but presented in a way that kids can appreciate and understand.  I just can't say enough about how  much we enjoyed it.  I hope you do, too.

Thanks Candy for linking up. I have wanted to begin reading chapter books with my son now that he is in kindergarten. I will have to see if it is at my library.

Wow! You just made my day! Thanks so very much!

Beckie, my pleasure on the link! :) Chapter books are so fun. I hope you enjoy reading this one as much as I did!

Oh, my, Barbara! YOU just made MY day with your nice comment! It is my pleasure to share your book with my readers! We just put one of your other titles - Fame and Glory in Freedom, Georgia - on hold at the library too! Can't wait to start reading! Thank you for your fun reads that are fun for moms too!

Candy: I read this book to my last 3rd grade class who I am not teaching in 5th grade. Those same students STILL remind me of when I read that book to them AND they still check it out to reread it!! It is such a heartwarming story and during these tough economic times, we need to be appreciative of having those things we need, not necessarily what we want. My favorite character was (I can't recall the name)the gentleman at the abandoned house. I just tried to remember how your cousins from Georgia speak and went with that twang! Love y'all.