Get over Go Daddy and the Super Bowl ad. 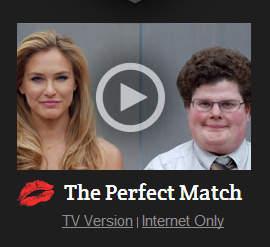 It won't stop.  The comments, that is, about the recent Go Daddy commercial that aired during the Super Bowl.  Here are my thoughts.

First off, I didn't see the commercial air live, as we were out to dinner with my inlaws and {thankfully} missed it along with the first hour of the game.  I watched it later on DVR and even though I was repulsed, did not find myself surprised.

Then came the slew of comments on my Facebook wall and Twitter feed about how people were now going to change where they registered their domains -- from Go Daddy to some other service -- all because of this poor taste in ad choice.  Personally, I think that's absurd.  I mean, sure the ad is not exactly enticing or in great taste, but did we really expect it to be?  I mean if the past few Super Bowl ads have been any indication, this is exactly the kind of commercial we should all come to expect from Go Daddy.  If you have kids and are worried about them seeing this kind of repulsiveness, then prepare for it.  You know it's coming.

The same can be said about the {in my opinion: lousy} performance by Beyonce during the half-time show.  I'll preface by saying first off that I am NOT a fan of Beyonce's as it is.  Her music doesn't gel with me and in my opinion, she just doesn't appeal to me as an artist.  But, it's BEYONCE for crying out loud.  We all know there's going to be gyrating and booty-shaking and lots of skin showing.  Why are so many people "disgusted" and in shock about how "sleazy" of a show it was?  Actually, I personally didn't think it was all that bad.  I was actually quite bored.  It's nothing we've not seen from Beyonce before, but certainly not beyond what one could expect.

Am I saying that I enjoyed being subjected to the awkwardness of the Go Daddy commercials or the sight of Beyonce's thighs?  No, not necessarily.  But, I'm not getting my panties in a wad for it all because hey, it's not like I would have expected anything different.  As much as we'd all like to think it's "family friendly tv", it's not.  We all know that.  To be honest, I am more concerned with my kids being exposed to the ads that glorify alcohol consumption, more than the ones that have sexual connotations.  But, knowing this about myself, it's MY responsibility to shield them from watching the ads, not my job to complain that they are part of the show.

People forget one thing in all this.  The Super Bowl is selling ads.  And the advertisers are going for the jugular in many cases when it comes to their ads.  We have known this for decades and yet every year it seems someone complains about the commercials or raunchy-ness of the half-time show.  This is what makes the Super Bowl the Super Bowl.  You can't get this stuff anywhere else!

So since you know it's coming, either watch it or don't.  But complaining about it is counter-productive.  It will always remain the Super Bowl.

Honestly, the Calvin Klein underwear ad made me more uncomfortable than either the kissing or halftime, but I've yet to hear one mom complain about it. Hmmm.

I couldn't stand that commercial!